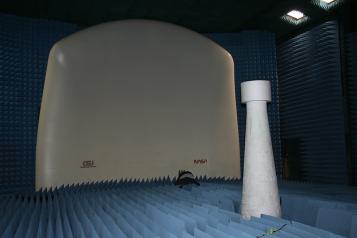 ESL's compact radar range is a state-of-the-art system that can measure the radar scattering characteristics of objects as large as eight feet long or as small as a straight pin. It obtains complex radar signatures versus polarization, frequency, and target look angle for both non-cooperative target recognition studies and RCS control studies. 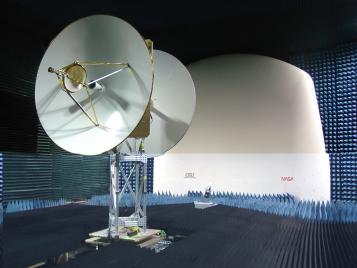 A collection of efforts to improve the sensitivity while lowering the noise of the chamber. A computer-controlled microwave pulsed transmitter and receiver were developed and have very low power (1/2 watt transmitted) yet is stable enough so that very high sensitivity can be achieved. A new technique for time-gating the received signal further improves the sensitivity and has been shown to be such a successful technique that it is being commercially manufactured today by Scientific Atlanta and Lintek. In addition, new radar absorbing materials (RAM) were developed to dissipate unwanted energy more efficiently before it can reflect off the walls of the chamber.

A new target support structure that is extremely rigid yet virtually invisible to the radar. Consisting of a tilted tapered-wing shape, its internal target rotation apparatus can accurately locate heavy objects while appearing much less visible to the radar than the thin strings used in the past. The compact range and accompanying data processing capabilities are available for commercial use and use by the Department of Defense. 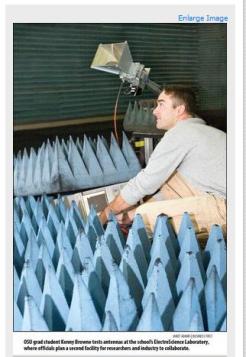 RCS and antenna measurements--relating to current or future research--can be performed for interested parties.