Anterior cruciate ligament (ACL) reconstruction is one of the most common procedures in sports medicine. It’s common enough that you probably know someone who has had one.

“And unfortunately, one in every four athletes who have had ACL reconstruction will go on to have a second ACL injury,” Stephanie Di Stasi, an assistant professor in Ohio State’s Department of Orthopaedics and research scientist in the Sports Medicine Research Institute, said.

“One of the factors that increase the risk for injury is poor knee joint movement patterns, so much of the time spent in injury prevention and rehabilitation is dedicated to correcting these flawed movement patterns,” Di Stasi continued. “The problem is that once the athlete leaves the doctor, therapist, or trainer’s clinic, we have no idea whether the effects of this training persist in a real-world environment.”

Researchers at Ohio State’s ElectroScience Laboratory are progressing toward a solution. 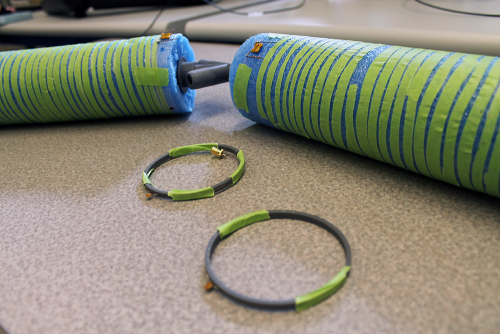 The team, led by Assistant Professor Asimina Kiourti, is developing a new class of wearable coils that can seamlessly monitor joint kinematics in a person’s natural environment.

“Asimina’s technology has the potential to provide insight into injury risk and injury mechanisms that we have simply never had before,” Di Stasi said. “This type of sensor technology has dozens of potential applications. Where it could be particularly powerful is in measuring compliance with rehabilitation and retention effects.”

According to Di Stasi, that could “mean big improvements in injury risk assessment, surveillance, and rehabilitation.”

It also means practical applications could extend beyond the confines of sports medicine to nearly any clinical population ⁠— from knee and spinal injuries to neurological disorders, like Parkinson’s Disease and stroke.

The potential impact is easy to envision. However, capturing accurate, real-time data in a person’s natural environment is more challenging for the researchers to grasp.

“It’s hard to anticipate everything that will happen, in terms of movement, in the real world,” Vigyanshu Mishra, a graduate research associate at ESL, shared. “We move in so many ways. We started with something basic, monitoring the flexion of the knee and the arm. That’s also when we started collaborating with Ohio State Sports Medicine.”

As their research progressed, it became clear to the team that rotation was also a critical factor to consider.

“Asimina’s team was willing to go back to the drawing board to see where design improvements could be made,” Di Stasi said. “This was important because joint rotations occur in three planes — with the initial design, we were only capturing flexion and extension.

“With the addition of rotation in the frontal plane, basically the side-to-side motion of the joint, if you’re looking at someone head-on, we can understand substantially more about the risk for and recovery after injury.”

Her team leverages cross-campus collaborations, like the one with Ohio State Sports Medicine, to guide research initiatives.

“A lot of my research is bridging two worlds ⁠— typically that’s medicine and engineering,” Kiourti said. “I have cases where I know I need to talk to someone with that area of expertise. I’ll start asking around to narrow down contacts who work directly in that field.”

The value of that persistence is noticeable, especially amongst her students.

“When you’re working on a research problem in isolation, and you don’t know the true applicability, it can be okay in a scientific environment,” Mishra explained. “But when it comes time to apply the tool to see if it actually works, you have to have collaboration and insights from experts in the field.

“Asimina is always on the forefront, leading. It catches your attention.”

It also captures the attention of her team’s collaborators, who are relying on the research conducted at ESL to improve patient health.

“Asimina’s value, and her team’s value, is immeasurable,” Di Stasi said. “We are often limited in the questions we can answer because of technological limitations. I feel very fortunate that we can innovate together and merge our scientific methodologies to impact the health and wellness of young adults.

“We can certainly do more together than individually, and that’s what’s so exciting and rewarding.”

The project is sponsored by the National Science Foundation’s Division of Information and Intelligent Systems (IIS). Mishra, who is pursuing his Ph.D. at Ohio State, received the prestigious IEEE MTT-S Graduate Fellowship for Medical Applications in support of his work.

“In the future, the goal is to move into real human movements in both static and dynamic scenarios,” Mishra said. “If we can have a smart garment that can monitor our movement on a day-to-day basis, we can develop a clear baseline. Then, anything that happens, even small changes, you can find that point. That’s when it also becomes an injury prevention tool."