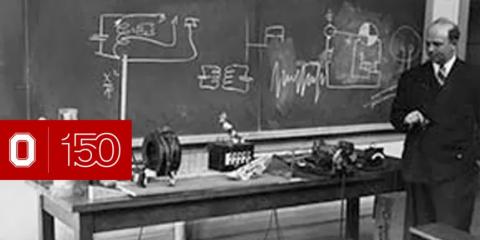 The Ohio State University is celebrating its first 150 years of excellence in education, research innovation, and community engagement by reflecting on its remarkable past and preparing for its bold future. Research and creative expression innovators have made their mark over the last 150 years by taking on the world’s issues as their direct challenges.

Ohio State’s Office of Research will continue to recognize many of those Ohio State innovators, and reflect on the university’s ongoing commitment to the discovery and application of knowledge. Keep up with their campaign.

One of the innovators recently recognized was William L. Everitt.

Everitt (1900 – 1986) professor of electrical engineering at Ohio State, held positions in the private sector, military and academia and was known worldwide as a leader in electronics and communication engineering.  Through his innovations, he laid the foundation for Ohio State’s ElectroScience Laboratory, first known as Antenna Laboratory.

In 1941, Everitt invented a new model measurement technique for aircraft antennas, which launched the Antenna Laboratory. This invention would eventually become the basis for modern RFID chip technology. When Everitt accepted a wartime assignment in Washington DC, responsibility for the project and the lab was assumed by George Sinclair, a graduate student who supervised up to 50 employees until his departure after earning his Ph.D. in 1946. The lab was renamed in 1967 to ElectroScience Laboratory in recognition of its expanded activities, including satellite community research.

Everitt was a founding member of the National Academy of Engineering. He was also named to the American Society for Engineering Education’s hall of fame and was cited as one of the top ten electrical engineers of all time by the Institute of Electrical and Electronics Engineers.

Another highlighted was Robert Kouyoumjian

Robert Kouyoumjian (1923-2011) was professor of electrical engineering at Ohio State for over 40 years after serving in World War II as a captain in the Air Force where he received training in meteorology.

His main research was conducted at ESL. His work included the development of accurate solutions for several canonical wire and plate structures and studying the polarization properties of antennas and the study of thermal properties of electromagnetic waves. His research was critical for future antenna and radar system design and analysis.

In 1995 he was inducted into the National Academy of Engineering for his work on Uniform Geometrical Theory of Diffraction. He has also received several awards from the Institute of Electrical and Electronics Engineers, including the Centennial and the Third Millennium Awards.