Posted: March 20, 2020
“I didn’t expect it to be so cold,” Oguz Demir said, laughing. “Yeah, it was supposed to be cold, but I really felt how it hurts you when it’s below -30 degrees Celsius. I’ll never forget that.”

(Watch a video interview with Demir at the ElectroScience Lab)

A graduate student in electrical and computer engineering (ECE) at The Ohio State University, Demir returned in February from a once-in-a-lifetime international expedition to the Arctic in the name of climate science.

Arctic travel may not seem such an obvious a path for ECE students, but it also reveals how broad the major is at Ohio State. For his work in remote sensing, Demir joined 600 scientists from 17 countries living on the ship Polarstern, frozen into the Arctic sea ice. They braved adverse weather, months of darkness, cracks splitting their camp in two, all while keeping a watchful eye out for the occasional polar bear.

Demir now conveys memories from his time there, either through laughs or somber head shakes. 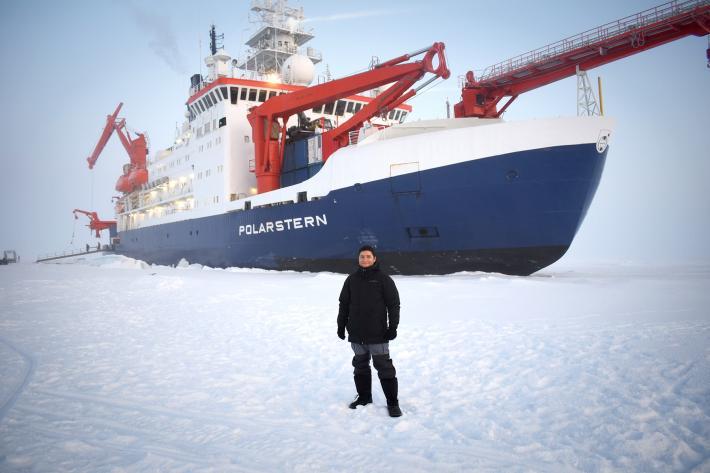 “We were exploring some part of the world as if no one had ever discovered it,” he said. “It was like the surface of the moon. That motivated me. Not many people see this environment. It’s special. It’s beautiful. I felt lucky. Whenever something was not working or something was very difficult - and at times I was about to give up - I reminded myself that I am so lucky to be here.”

The Multidisciplinary Drifting Observatory for the Study of Arctic Climate mission, or MOSAiC, houses researchers collecting an unprecedented amount of data to take climate and ecosystem research to the next level for Earth science. The endeavor is spearheaded by the Alfred Wegener Institute, Helmholtz Centre for Polar and Marine Research (AWI). The National Science Foundation funded Ohio State’s research proposal to operate an ultrawide band radiometer to estimate sea ice thickness and salinity.

The instrument in the Arctic is working well, Demir said, despite some major setbacks. At one point a strong storm hit the area, cracking the ice beneath them, literally dividing the MOSAiC camp into two pieces. One section drifted 400 meters away.

“No one even expected that would happen,” Demir said. “We were so scared we would not be able to see (the camp) the next day, if it keeps drifting. Luckily, it stopped drifting and it actually came 100 meters back. Ice kind of has a memory. It comes back to where it was.”

Afterwards, he said, the entire ship full of people banned together, reestablishing the camp in a more solid area. It was arduous work.

“We had to cut every power line. We had to make the roads again,” Demir said. 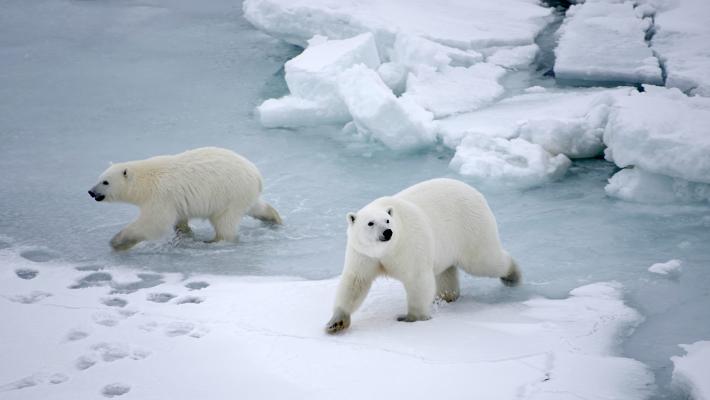 Meanwhile, he’s operating a wideband radiometer built at Ohio State to study ice emissions. Demir said having to leave his work to build roads and work on other projects caused by the ice cracks was challenging, but it gave him time to think of his next steps.

Throughout it all, watchful eyes onboard the ship searched for surprise polar bear visits, which required the researchers to drop their work for the moment and head inside for safety.

“We had 10 or 12 bear incidents. I mean, they just showed up. When they did, the ship had infrared cameras and could detect them,” Demir said. “It was quite safe, but it was great to actually see those bear from onboard, of course, in a safe place. It was a unique experience. You may never see a polar bear in your life.”

The hardest part of the expedition was getting used to the constant darkness, Demir said. During the first two weeks on camp, at least some hopeful sunlight shone in the distance.

“It was amazing. But within two weeks, the sun completely disappeared,” he said. “It was strange at the beginning. That’s something I’ve never experienced. The first weeks were okay, but after one month you feel… a little depressed.”

After months of total darkness and unexpected extra work, there were opportunities for breaks. A small bar on the ship opened a few times a week. There was a shop, a living room with a nice coffee machine and board games. Then, they discovered the ping pong table in the lower deck.

Researchers also tried to get the captain to shut off the lights on the ship for a bit, so they could enjoy the dazzling spectacle of the stars (invisible because of the constant ship spotlights). The captain’s answer was a firm negative.

Demir said he was part of a team of other remote sensing scientists on the ship, and helped support multiple instruments during his time aboard. Likewise, other team members will help support Ohio State’s remote sensing instrument moving forward.

“They can operate it, and if there is any problem they can fix it,” he said. “I am always in contact with them.”

The unique research and educational experience Demir takes away from the MOSAiC expedition is invaluable.

“I don’t know that I will ever have such an opportunity again, seeing so many people from different backgrounds and being able to talk to them and really understand what they are doing. It broadens your horizon – literally,” he said. “That’s awesome and I am so happy that I had the chance.”

Demir returned to a gloomy Midwest winter this February, but with an entirely new perspective on life. He said even the unremarkable, cloud-covered, Ohio skies were enough to make him feel “reborn.”